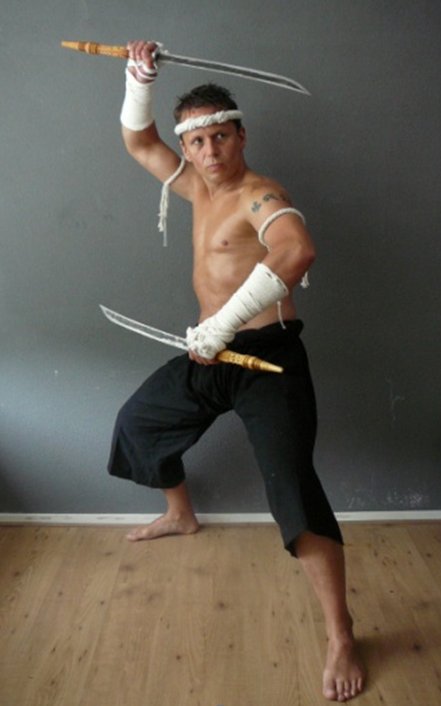 Muay Thai began at a time when martial arts were still very much linked to tradition and spiritual values. With origin in Thailand, this art is over a thousand years old. It is practiced all over the world and is also known as Thai Boxing. Directly originated from Muay Boran it developed from a necessity of the Thai people for self defense, historically known as Chupasart that had military influence, this martial art thus gave origin to Muay Thai as a sport.

In the years 1767-1781 there was no system of points in fights and these were held in open spaces or temples only much later were ringues created in recreational spaces and fighters began to bind their hands and fingers with rags and resin. Also in this time the use of Mogkon and Paprajiat came into use. However the fighters did not fight according to age, height or weight. The rules were simply to fight until there was a clear winner (that meant when one could not fight back or even die).

Through 1782-1868 the first rules and regulations were set, such as duration of the fights. They would use a coconut shell with a hole in a water tank to control the time of each round, when the shell sank to the bottom, the end of the round was signaled. However there were no round limits.

After World War II and in the 1920s the first ringues as we know them were developed, a corner for each athlete was set, a referee who separated the fighters, the use of drums and 11 rounds 3 minutes each, biting the opponent or attack while falling was punished and a fighter would have to go to the corner when the opponent fell. However, they still used horsehair or ropes instead of gloves we see today. Only in 1929 did all fighters begin using boxing gloves. In this date in first international ringue was built with three ropes and tarpaulin floor, red and blue corners, two judges, a referee in the ringue and the bell signaling the rounds. Protection of the genitals was also introduced. Fighters after World War II began to be regulated by the Department of Physical Education and weighings are held; tournaments become 5 rounds of 5 minutes each and 2 minutes rest in between.. 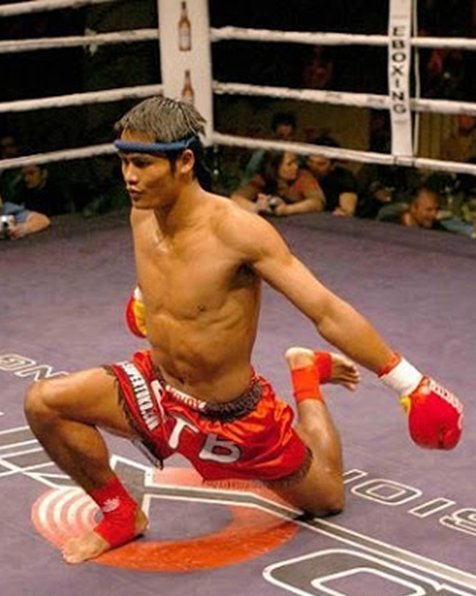 In 1948, the athletes’ weight is measured in pounds as the international model and names or each weight group is differentiated (flyweight, bantamweight), a champion is chosen from each group and adopted style. It is now forbidden to hit the groin area, considered highly derogatory in the fine art of Muay Thai.

Nowadays, on a national level, several modalities exist with specific rules, as in Muay Thai, rules change in consideration to level and athlete class as stated in the regulation of the Federação Portuguesa de Kickboxing e Muay Thai. The protection gear also depends on level and class and a constant concern with the physical integrity of participants is taken into account, the presence of a health professional is mandatory in all competitions is proof of this concern.

In the 1950´s two great masters, Osamu Noguchi (boxe) e Tatsuo Yamada (creator of Nihon Kempo Karaté-do), were fascinated by Muay Thai, for it used absolute contact between fighters. They promoted tournaments in which fighters of both Karate and Muay Thai entered. Through these tournaments derived the term Kickboxing. The term Kickboxing was used in the 1960´s as a hybrid martial art combining Muay Thai and Karate. It is therefore false to think that Kickboxing is Thai in origin.

It was in Japan in the decades of 1950 and 1960 that karate and Birmanian Boxing (namely Maung Gyi) professionals organized fights on the matt and ringue and so Japanese Kickboxing was born. The Japanese Kickboxing promoter in 1960 was Osamu Noguchi. In this time in the USA martial art schools organized Full-Contact events in the subjects Bando, Karate, Taekwondo, Kempo, etc. In the 1970s many Karate fighters felt frustrated with the competition rules of the time, because they privileged control instead of touch and so sought for a sport that used jab power with legs and fists. And so Karate Full-Contact or American Kickboxing was born. There were three pioneers in this area: Dante, Ray Scarica e Maung Gyi. These full contact tournaments were big in the 1970s and many martial art athletes participated and the term Full-Contact was established.

However the official separation between Karate and Kickboxing was set with the creation of PKA Professional Karate Association and WKA World Kickboxing Association, the latter responsible for regulation and rules and promotion of Kickboxing.

Still in the 1970s, Kickboxing develops in Germany through George Bruckner, who expanded the name Kickboxing through Europe with speeches and sporting events and became co-founder of WAKO, in 1978 the first world kickboxing tournament. Today WAKO is a worldwide known international kickboxing federation.

In including more power into jabs, the goal was to KO (Knock Out) the opponent. With this begins a growing concern in adapting the rules to this new concept, so as to protect the fighters’ physical integrity. In Thailand this evolution in rules was slower to implement.

In the 19th century Muay Thai gained worldwide recognition in Great Britain and rapidly spread through Europe and the world. It initially began with the usage of weapons and techniques, such as swords, daggers, spears, axes, among others. After this, the whole body was used as a weapon focusing on nine main parts: fists, elbows, knees, feet and the main weapon - the head, used not only physically but through intelligence in applying correctly the techniques transmitted by ancient masters through time. With the end of wars, the weapons gradually vanished giving origin to a combat sport, engaging in body to body confrontation in extremely violent fights, many of which only ended with the death of one of the fighters. The need to protect the fighters gave origin to the creation of rules and the classification of Muay Thai as a National Thai Sport.

Nevertheless, still today, some ancient traditions persist such as the instrumental music of flute and percussion throughout the fights, called Sarama. This is used to encourage fighters. It varies in melody according to the intensity of the fight, so it should be played live. The ritual dance Ram Muay is mandatory before each fight, in which a slower type of music is played to honor the trainer and school/club the fighter belongs to and those who applaud the fighter.